IPDataLab has developed the most extensive collection of declared Standard-Essential Patents (SEPs), from over 15 Standard Setting Organizations (SSOs).

Though SSOs do not conduct any verification to check if a declared patent is standard-essential or not, declared SEPs are the only comprehensive source for patents relating to a particular technology standard. IPDatalabs has retrieved all SEP declarations from major SSOs like ETSI, IEEE, ISO, CCSA, OMA, IMT, OneM2M, TIA, ATIS, ITU-T, ITU-R, IEC, IETF, ANSI and TTA, to provide a dashboard for easy searching and visualization of patents. In the next version we will also include declarations ARIB, CATV, UHDTV satellite and cable broadcasting, MPEG, HEVC and more.


The information declared by different SSOs is provided in different, which could be submitted as handwritten forms, scanned PDFs, or uploaded disclosures on the SSO database. Also, the patents declared by the applicants are not provided in a standardized format, which makes searching for patents very challenging.


Automated retrieval of patent numbers from PDFs or forms could produce errors. Therefore, our team extracted list of all SEPs from the above-mentioned sources and manually standardized patent application and publication numbers, to retrieve bibliographic and patent family details (patents filed in different countries). Since all patents in the family relate to the same invention, duplicate declarations were removed using the patent family data. We also conducted quality checks to compare if patent assignee matches that of the declaring party. In cases where the declaring company did not match the patent assignee, we manually checked and updated the patent and removed those patents, which did not seem to be relevant to the standard.


All SEPs reference a specific version of a standard, or a standard without specifying the version, or standardization projects in different standards (such as LTE). Only some SEPs declare precise standard sections or chapters.


Our dashboard provides the ability to search across all declared SEPs, and understand distribution of SEPs by ownership, SSOs, and other bibliographic characteristics.


Most patents are declared at ETSI (European Telecommunications Standards Institute) and the dashboard provides specific insights into SEP distribution across declared patents in 5G, 4G and 3G technologies. 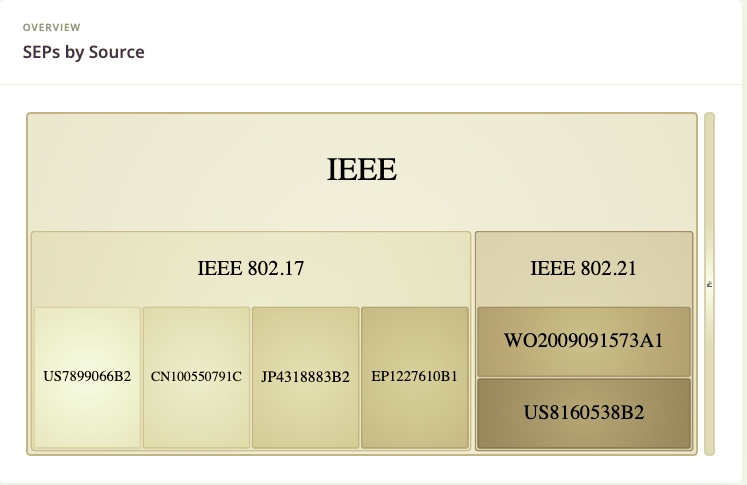 This option is for customers that desire to immediately search and interact with this data set in an online research platform hosted by us, IPDataLab.

Select this option for electronic payment support leading to immediate access to the IPDataLab research platform.

This option is for customers that desire to integrate some or all of this data set into their own commercial or research system. In most cases, redistribution of the data, even commercially, is not prohibited.

Let us show you what is possible with leading edge intellectual property data intelligence.